The gangs are closing in on the hijras, demanding that they prostitute themselves. But Mindy will stop at nothing to protect her new allies. It's time to catch the Beggarman and make him pay. 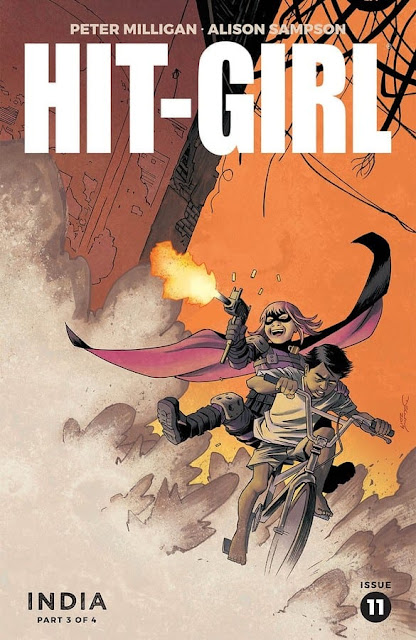 
This tour stop in India for Hit-Girl is the most culturally immersive experience so far. Mindy isn't the entire focus of the story which gives the subplots involving the locals the proper perspective and context. Peter Milligan seems to have done his homework in regards to Indian vernacular and culture that it doesn't feel forced. It's what separates this arc into something special along with Alison Sampson's uniquely brilliant art.

Hit-Girl is clearly the interloper and her mission is to bring justice with extreme prejudice. Here though, she also finds friendship and shows more empathy than we're used to seeing from her. She trusts Ram and is her link to the streets of Mumbai. She also wants to empower a group of women to fight back at the criminal element that threatens their lives. Not to worry though, she still gets to violently dispatch the bad guys with reckless abandon.

Sampson's art style is bold and expressive. It's very stylized and Triona Farrell makes it all very colorful and vibrant. The art team really meets the challenge of portraying such a populated location with a combination of detail and creativity. It's almost dreamlike the way Sampson and Farrell present the landscapes and dense city streets. It's really unlike most comic art and that's what makes it great.

'Hit-Girl' #11 sets up an explosive finale to this latest world tour stop in India. It's a complicated and intriguing bit of superheroing in a foreign land that the creators handle with great respect and focus. Milligan allows the supporting characters to speak for themselves instead of Mindy dictating the narrative completely. It still features Hit-Girl kicking ass but with a more immersive storyline. This might be the best arc yet.