BRAND NEW SERIES! Riverdale's own bombshell bloodsucker is back! Following the events of the Jughead the Hunger vs. Vampironica crossover, Veronica returns to her own universe, still a vampire. She's not the same, and she knows it. And now she needs answers. But she may not be ready for what she's about to discover! 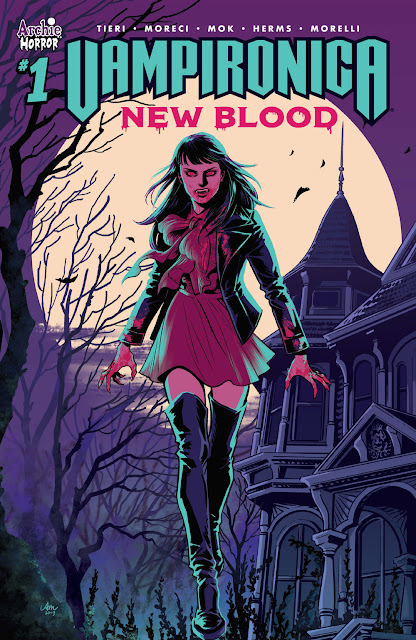 Archie Horror is a formidable imprint that is completely different from its more famous and legendary mainline titles. Archie has taken these beloved characters and thrown them into some really gruesome and terrifying situations that are as good or better than any horror series available in comics. The style and swagger in which writers like Frank Tieri and Michael Moreci have created in this alternate reality are undeniably cool and suspenseful. It has the feel of TV favorites like 'The Vampire Diaries,' 'Supernatural,' and of course, 'Riverdale.'

Veronica wakes up back in Riverdale after the events of the last series where she battled werewolves including a wolfified Jughead. Her strange attraction to him leaves her a little shaken now that she's back in this world where Jughead is just Jughead. Confused and frustrated she needs answers about her lineage as a vampire from her parents.

Meanwhile, Fangs Fogarty has his sites set on Sheriff Keller. It's a confrontation that sets the stakes for this new series and fills out the world with all new dangers and conflicts. 'New Blood' delves deeper in the mythos behind the supernatural factions that battle in the shadows. Fangs is determined to reveal these secrets to the world.

It's an engaging and involving first issue that doesn't require reading the first series (although you should cause it's a ton of fun) and sets up plenty of conflicts down the line. 'Vampironica: New Blood' is just the latest and greatest horror title from Archie that deserves your eyeballs.