Hard Revolution Part 4: The Fiend. The city is abuzz about a mysterious new vigilante - claiming to be the new Black Ghost! But can Lara keep her new side gig a secret as she quickly realizes that the tentacles of the Creighton underworld fight back? Ragged and desperate, Lara must call every ounce of her reserves to uncover the truth behind the mysterious figure pulling the strings of the city's criminal landscape - and what they really want. 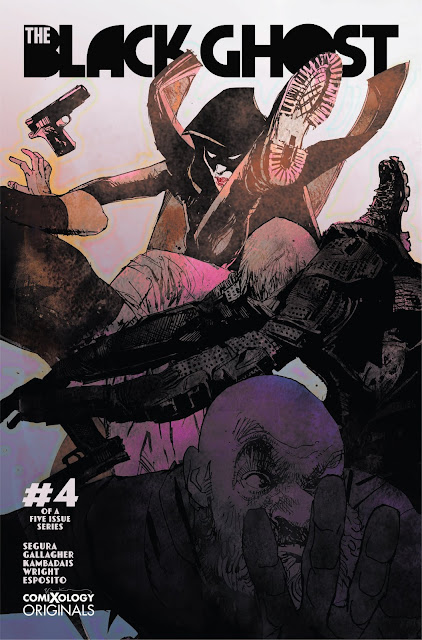 The Black Ghost (comiXology Originals) #4 (of 5)

'The Black Ghost' has been really entertaining. It's a unique vigilante story with a complicated lead. Lara Dominguez is a talented reporter but obsessed with a local vigilante called The Black Ghost. Her obsessive admiration leads to witnessing his demise. Now, with the Black Ghost out of the way, local gangsters threaten Lara's neighborhood. Even worse, a series of bad decisions have put Lara and friends in danger.

Lara is Lois Lane if she had a drinking problem and coped with her emotions with casual sex. She takes on the trope that's traditionally a private detective characteristic. Hard-drinking, hard-fighting, goes by her own rules and has a go-to lover without the messy emotional attachments. Unfortunately, her drinking, her stalking of The Black Ghost, and irresponsibility has her taking over the vigilante's moniker. It's put a target on her back and now she's in big trouble with the big bad guy.

As a reader, you want to root for her and get her life together. Especially when she starts donning the mask as The Black Ghost. She is her own worst enemy though. Even when friends and colleagues try to help or talk sense to her she rebels and checks out by getting blackout drunk. Her heart is in the right place and wants to bring justice to Creighton if only she could stabilize her chaotic life.

The art by George Kambadais and Ellie Wright is bright and sometimes minimalistic but conveys Lara's state of mind and her emotional arc in well-designed panels full of expressive details. It's a great-looking series that is kind of softer and cartoonish for a vigilante comics. Nonetheless, the art is consistently inviting and creative.

'The Black Ghost' continues to entertain with an eager yet flawed hero. This penultimate issue sets the stage for a big confrontation. Will Lara survive? Will she get out of her own way? Honestly, we can't wait to see what happens next.