A fight 25 years in the making: Vampirella vs. Hemorrhage! And even if the recently revived Darling of Drakulon wins, Mistress Nyx, with her cruel intentions, waits in the wings to undo the very resistance beginning to form around our hero! It's all presented by acclaimed writer Tom Sniegoski and art sensation Michael Sta. Maria and an amazing series of covers! 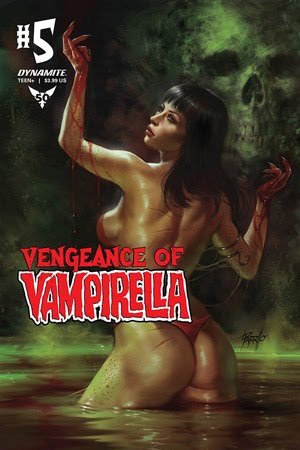 It has all lead to this. The first story arc to 'Vengeance of Vampirella' culminates in one action-packed finale. This conclusion was expected since Vampi was resurrected from the dead to save humanity after Nyx and the Chaos Lords turned the world to one giant repressive dark and gloomy dystopia. Vampi is pissed off and out for blood, Hemorrhage's blood to be exact.

Saving humanity is no easy task but with Vampi at full-strength, she's more than ready to take on the lovesick Hemorrhage and whatever Nyx throws at her. Here, we also get some background on Hemorrhage's sad and violent backstory. It nicely provides some context for his attraction to Vampi. The stakes are huge as the two face-off amid a resurgence of sunlight and the hope it brings. It helps to propel the story and its ultimate confrontation with Nyx that's sure to happen in the future. After a slow start without Vampi even in the first issues, the story picked up steam once she returned from the dead.

The art as always is fantastic. Michael Sta. Maria and Omi Remalante, Jr., have been consistently creative and precise. There is a flashback scene that is a little jarring because it's penciled by Justin Mason. It's still an intense sequence but Mason's style is more anime-style so the contrast is pretty stark. Nonetheless, overall the bloody action is bold and epic in scale. The opening of clouds and rays of sunshine look like they should be accompanied by an orchestra. The artists have conducted a masterful job of driving the action with clever designs and quick pacing.

'Vengeance of Vampirella' began slowly with little Vampirella to be found only to end the first arc with one-pissed off Vampi fighting the evil forces that turned the world into one giant hellscape. This is the Vampi we've been waiting for. The trajectory for the series is on the upswing as it rewards loyal fans for sticking around as the battle against Nyx is just beginning.