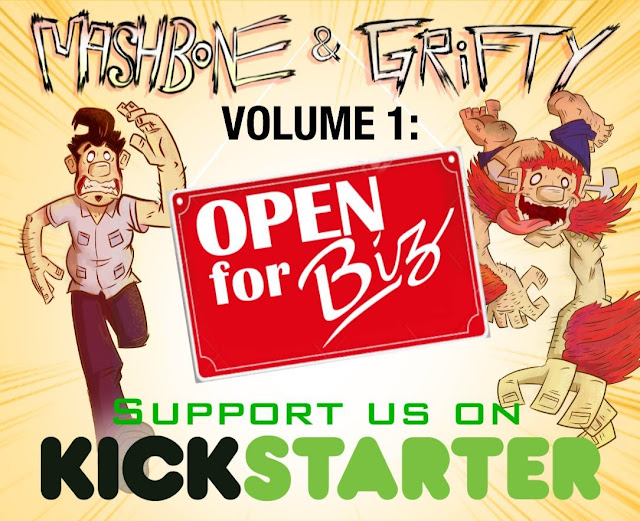 The Hilarious adventures of the dumbest Detectives around conclude in the ALL-NEW Season Finale, printed for the first time IN COLOR!

Our goal is to raise $3,500 to print a MEATY MONSTER of a comic, telling the story of how Mashbone & Grifty went from losers to... busy losers! You'll get the first four issues, including the debut of the BRAND NEW issue 4: Son of the Master!

With over 200 pages of Satirical mutated-monkeyman action-comedy along with annotations following each issue, this volume is perfect for fans to catch the latest adventure in glorious COLOR, as well as an excellent place for new readers to jump on the MASHBONE EXPRESS!

The First Rule...
Are you Ready for some DEATHBALL?!?
A L'l Bitty Crimmus
BRAND NEW STORY: Son of the Master
Annotations for each story
One-shot comic, Mashbone & Grifty at Staple! Independent Media Expo

MASHBONE & GRIFTY is a satirical action-comedy, about a gullible, happy-go lucky monkey-man and his pessimistic, cowardly sad-sack best friend who, after years of stagnation in dead-end gigs, decide to take life in their own mitts by starting their own detective agency in a South Texas border-town.