The Future. Ultra-modern megacities reward millions of their citizens with a completely funded life, with every need met, from food to housing and healthcare, in order to compete in an economic power struggle in which population is key. But a few rural residents still cling to their independence in what last American small towns are left. When a nearby megacity pressures the people of a small town join up or else, a young teenage girl named Clem will learn how far she'll go to defend her principles. 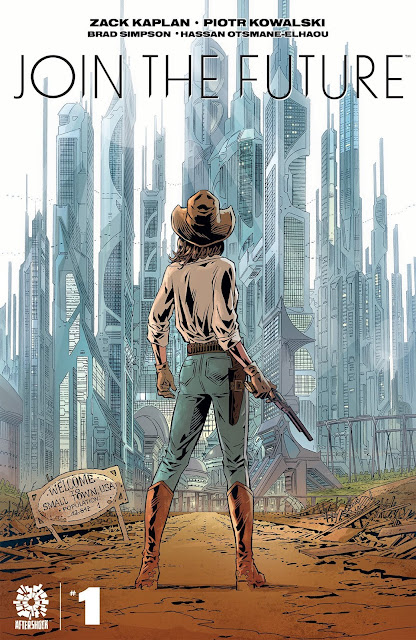 Written by Zack Kaplan (LOST CITY EXPLORERS) with art from Piotr Kowalski (Port of Earth, Eclipse, Sex, Marvel Knights: Hulk, The Dark Tower), JOIN THE FUTURE is a sci-fi western that examines a future where everyone must ask what your values are truly worth.

As a reviewer, I talk a lot about world-building in comics. I have to determine if the writer has established a well-defined time and place that supports the story being told. Like any reader, I want to be transported, enveloped into another world even if that world resembles my own in certain ways. I want to believe it. No one does a better job than Zack Kaplan at world-building, creating realities that seem futuristic and other-worldly but as we've witnessed in our real lives anything can happen so these entertaining adventures can also serve as a cautionary tale. In 'Join the Future,' Kaplan has another fully-formed story like Eclipse, Port of Earth, and The Lost City Explorers, which is exciting and an instant must-buy.

This gem of speculative science fiction proposes a future where huge modern megacities swallow real estate and recruit citizens with promises of a complete socialist society where every need is met. This enticing offer is perfectly illustrated in the opening pages with a propaganda-style pitch that makes it all seem too good to be true. The story shifts to those who've held out amid pressure to "join the future" and live in the shadow of these gigantic megacities in rural towns that resemble Western life in the 1800s. The juxtaposition of this dusty town with it's stubborn but principled inhabitants resisting the urge to succumb to the shiny and imposing megacity is prime material for a battle of wills that come to a boil in no time. The story has layers that reflect our times now with pervasive deforestation, gentrification, and overdevelopment wrapped in a science fiction-western action drama. What more could you want?

The art team of Piotr Kowalski and Brad Simpson make this dichotomy of a futuristic utopia set against an old Western town a vivid reality with clever concepts and attention to detail. The two worlds within a world couldn't be any more different but Kowalski and Simpson breathe life into both creating a culture of opposites that look stunning equally.

'Join the Future' is another exciting sci-fi series from Zack Kaplan that blends genres, adds a new commentary to familiar themes and hooks the reader from page one. The book looks fantastic thanks to Kowalski and Simpson. It's definitely worth your time and money. You might as well put it on your pull-list now.