SERIES PREMIERE! When the placid mining village of Woodsburgh is disturbed by a series of brutal murders, the settlement is in turmoil. And as the first snow covers the chaos in a white blanket, a mysterious woman in black arrives, eliciting a totally different kind of unrest. But who is Lady Hellaine, really? And what's her secret agenda? 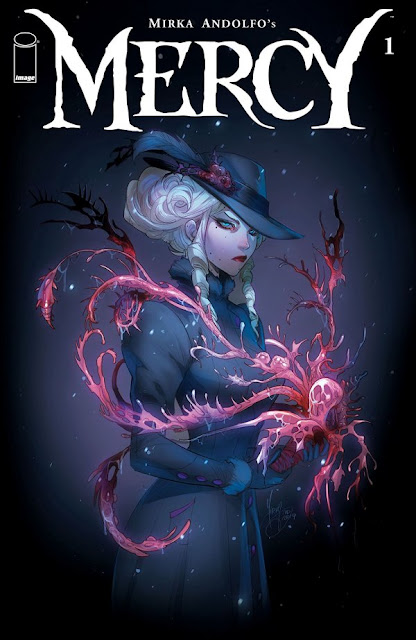 Acclaimed UNNATURAL creator MIRKA ANDOLFO presents a sensual Victorian gothic horror about otherness, damnation, redemption, and what it means to be a monster in a horror tale perfect for fans of Penny Dreadful, Crimson Peak, The Alienist, Parasol Protectorate, and Dark Shadows. Visit gotmercy.me for additional MERCY bonus content, including exclusive art, a live-action comic trailer, and supplemental story material.

Mirka Andolfo's 'Mercy' is a great dark and engrossing Victorian thriller that oozes style and suspense. The issue jumps right into some supernatural elements that aren't explained but an instant attention-grabber. The unfolding story introduces some intriguing characters, women with mysterious personas that will undoubtedly be revealed in time. Andolfo weaves a stylish gothic drama that's elegantly designed but also surprisingly graphic and sexy at times. The comparisons to The Alienist, Crimson Peak, and Penny Dreadful are right on. This is in the same category of wonderfully inventive, dramatic, and addictive gothic horror stories that are hard to resist. 'Mercy' is an unnerving but intoxicating gothic thriller that sizzles with suspense and sparkles with style.