Defeated and downtrodden, Ethel learns the hard truth about Sweetheart, Arizona, and it ain't so sweet. Deadset on finding the man who murdered her family and without a lead to go on, she does the only thing left to do-return to the scene of the crime. And with it, a flood of brutal memories wash over Ethel, threatening to undo her quest for revenge. But Ethel isn't the only one confronting her past. Famed gunslinger Solomon Eaton is forced to rekindle old ties. Will they meet him with a handshake or a loaded gun? 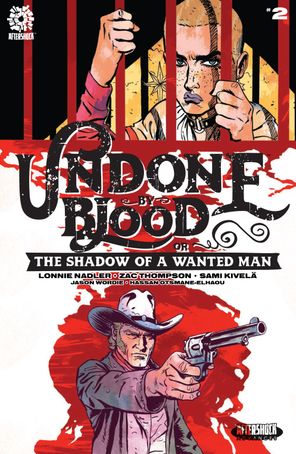 From the minds of Lonnie Nadler and Zac Thompson (The Dregs, X-Men, HER INFERNAL DESCENT) and artist Sami Kivela (Abbot, Tommy Gun Wizards) comes a neo-western that depicts the hard truth of seeking vengeance in the real world.


Undone by Blood or the Shadow of a Wanted Man #2

QUICK REVIEW: I dig Westerns and what the creative team has done on 'Undone by Blood' is an irresistible mix of old school pulp adventure and modern-day neo-noir revenge storytelling. Issue two picks up where the first left off as the Sheriff interviews Ethel after her fight at the bar. It leads to her being locked up for the night and he realizes she's returned to town years after that tragic murder that took away her family. She's undaunted to snoop around and go back to the scene of the crime and look for more clues. The mystery behind what happened and her investigative work makes this chapter more and more engrossing. You can't help but get wrapped up in the flashbacks and new characters. Meanwhile, the other storyline finds the Western novel's hero Sol Eaton trying to stay alive as hunters track him down. With fantastic art by Sami Kivela and Jason Wordie and a tightly written script from Lonnie Nadler and Zac Thompson, 'Undone by Blood' is one of the most entertaining and stylish comics you can buy.